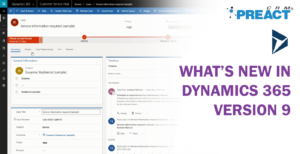 Microsoft Dynamics 365 Version 9 will shortly be available as an upgrade.

In our latest webinar we introduced the important changes in Version 9 to an audience of Dynamics users.

A is now available.

D365 Version 9 sees Microsoft deliver on its promise of an app-centric structure by separating the code between the platform and role-based apps.

We discussed what this means for the future development and release cycle of Dynamics 365.

A crucial part of the structure, and the Microsoft cloud architecture, is that apps are connected.

We highlighted the importance of Microsoft Flow as the cloud workflow engine and how this short-cuts repetitive tasks between apps.

We explained why the UUI been developed, and what user and administrator challenges this addresses.

Due to some limitations with the first release of UUI, in the first instance, admin may choose a refreshed web interface that is released with v9.

During this live event we also featured:

We concluded by discussing how LinkedIn is now part of the D365 story and we introduced a new app for Lead Gen Form integration.

to see a demonstration of this major release and get links to our earlier webinars.

is a Microsoft Gold Partner implementing and supporting CRM solutions since 1993.

for more information about Dynamics 365 and CRM.