Have you ever found yourself wishing you didn’t have to scroll past unused fields in your CRM software? Maybe people in other departments need them but your department doesn’t. Or, maybe you have sensitive information that needs to be captured and you don’t want everyone in the company to be able to see it. Or, maybe custom functionality needs to be added for certain people. Or, maybe ….

Whatever your reason for wanting it, it is possible in to have more than one version of a form. I’ve added a couple of screenshots of the Contact form to show how this works.

In the first one, some of the default fields are visible under the General section. 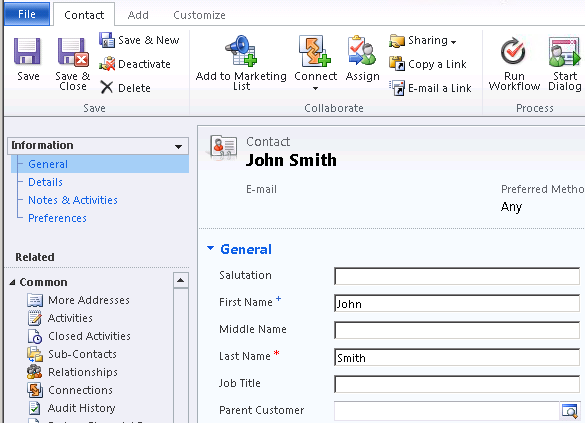 However, in the second example Job Title and Parent Customer have been removed, and a new field called Friendly Name has been added. 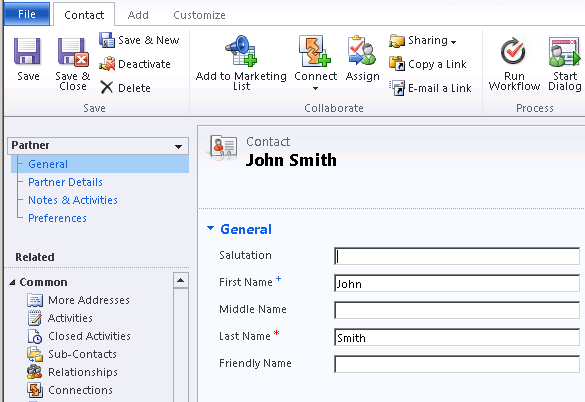 You can switch back and forth between these two versions by clicking on the word at the top of the navigation list of form sections. A drop-down list of form versions will appear for you to select.

Behind the scenes, all possible fields that can appear on the Contact form are in the database. However, only certain ones are chosen to appear on a particular version of a form. The form itself is created in the Customization area of CRM.

The differences between versions can be a lot more complicated than just a couple of extra fields. Different Security Roles can be assigned to each version, so that only the version that a user has access to will be available. Also, each form can have its own custom scripts that respond to form events and add enhanced functionality.

By Debra Polvi, CRM Consultant with